The BTA coordinates and promotes the interests of 18 Alberta local skilled trades unions, whose more than 60,000 members work in the residential, commercial and industrial construction, maintenance, and fabrication industries.

This message is only visible to admins:
Problem displaying Facebook posts. Backup cache in use.

On Labour Day, thank the workers who get us through these trying times

Without question, Labour Day 2020 feels much different than it has in the past. But as we look back on the difficult times we’ve all faced the last few months, the meaning of Labour Day should take on a whole new appreciation for everyone.

While the large barbecues, events and celebrations we’ve come to associate with the last long weekend of summer are - rightfully - on hold this year, the COVID-19 pandemic that has upended the status quo and tossed out routine, has also highlighted the vital role workers play in keeping our communities healthy and our society running.

So, to our brave frontline health-care workers who toil through the virus day in and day out, putting themselves and their families at risk in order to protect us, thank you.

To our courageous grocery store workers who labour in terrifying times to ensure we have access to the necessities of life, thank you.

To our transit workers facing daily exposure to make sure the public gets to work, their doctor or to see a struggling loved one, thank you.

To our heroic emergency services workers who keep our neighbourhoods secure, our streets safe and deliver timely care to those who need it most, thank you.

To our bold truckers and transport workers who venture out despite lockdowns and outbreaks to keep our supply chains moving, thank you.

To our devoted teachers educating our kids for the future in the face of fear and the unknown, thank you.

To our strong construction and maintenance workers who pick up their tools every day to build crucial infrastructure, ensure the safe operation of our refineries and who keep our economy moving, thank you.

This Labour Day, and for all the Labour Days to come, remember the roles workers played in getting us through COVID-19, because without their resolve and courage, the hard moments of the last half year could have been catastrophic.

Right back at ya brothers and sisters

Thanks for brass pools.

Are you ready to man a tent 24 hours a day, 7 days a week, from fall until spring. AUPE did and I was proud to stand with them.

I have SO much love and respect for this young man😊. Good work Ethan for staying true to yourself and your heritage😊

Is there a program for our boys to be introduced to the trades?

Big thanks to Insulators Local 110 for having BTA to the hall last night for a great chat with members via Zoom.

Good discussions on everything from the Building Trades of Alberta Training Society - BTATS, to labour legislation, bargaining and more.

Thanks for your attendance and comments. Hopefully more members will tune in next time

On Aug. 5, TC Energy announced a project labour agreement with four U.S. building trades unions to ensure the Keystone XL pipeline on the American side is “built by the highest-skilled and highest-trained workforce.”

There is no doubt the unionized building trades brings both peak quality, safety and the most accomplished skilled tradespersons to any job. This is true on both sides of the border.

Much of the work on the Alberta portion of Keystone is done by Building Trades of Alberta affiliates, including welders and pipefitters (United Association Local 488), Teamsters 362 and Liuna Construction & General Workers Union Local No.92.

With billions being invested from the province in this project, it’s reassuring to know its construction is employing many Albertans in the organized skilled trades.

BTA has long supported Keystone XL and many other pipeline and energy developments. These projects provide good-paying jobs for Albertans and contribute greatly to the health of our province’s economy.

Are the pensions of these unions invested into union supporting corporations?

When will a barrel of crude oil equal west Texas crude? When will Alberta stop giving away their crude oil to greedy and opportunistic exploitive corporations?

We are very happy to see Albertans and many others in Canada and the U.S. getting back to work with good-paying jobs on projects, such as Keystone XL, that pay the bills and put food on the table. #TimeToBuild #KeystoneXL

I am 100% Behind Alberta Oil , Always Have Been And Always Will Be

Im a b welder how would this original aboriginal get signed up asa 488 member ???

So Proud of Being Part of TC Energy 🤗❤

I hope it gets fully built. However I have serious doubts

Great pic of the Teamsters 362 Motion Production Division from Keep Alberta Rolling. Check them out for info on some big time Alberta-made TV and film productions 🎥🚚We work wherever the light takes us 🌅

Our deepest condolences to this worker’s family, friends and colleagues. 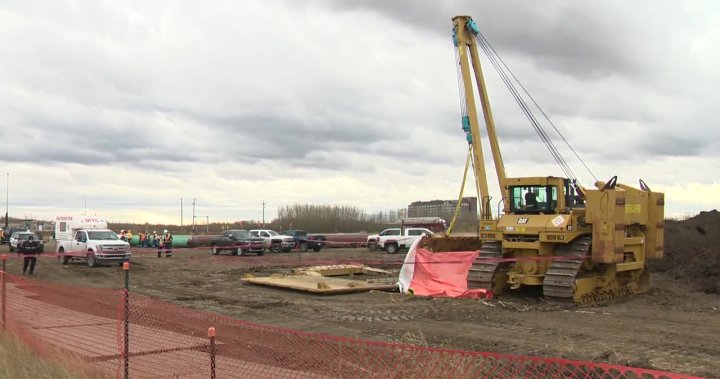 A man died on the job Tuesday afternoon at a work site on the corner of Whitemud Drive and Winterburn Road in west Edmonton.

Proud to discuss the adverse effects of right to work legislation on the working people of Alberta with the Premier and the Labour Minister. https://twitter.com/BuildingTradeAB/status/1321198938544771072 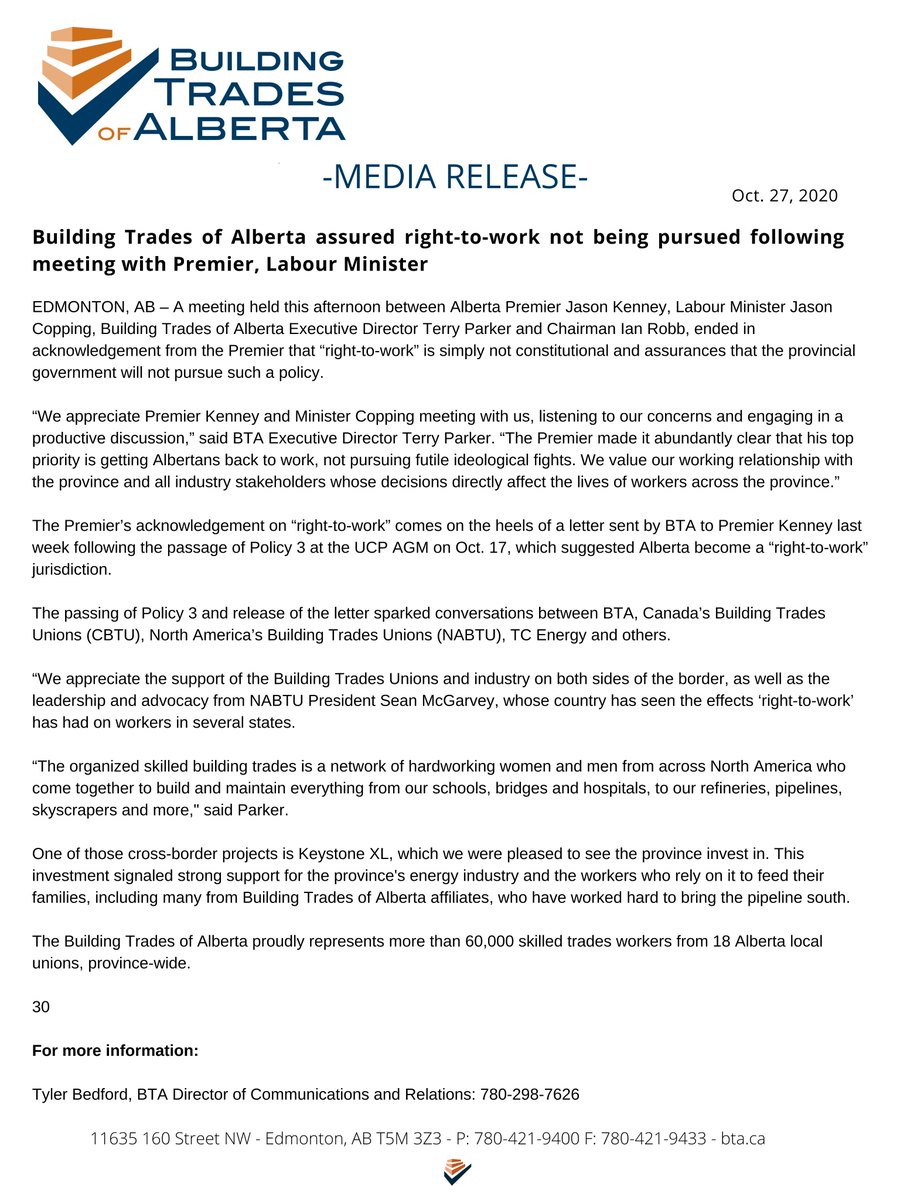 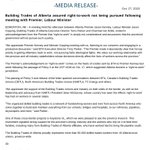 Alberta prompt payment legislation is planned for June 2021. With comment from @BuildingTradeAB @CCAbuildsYYC and the Alberta Roofing Contractors Association. 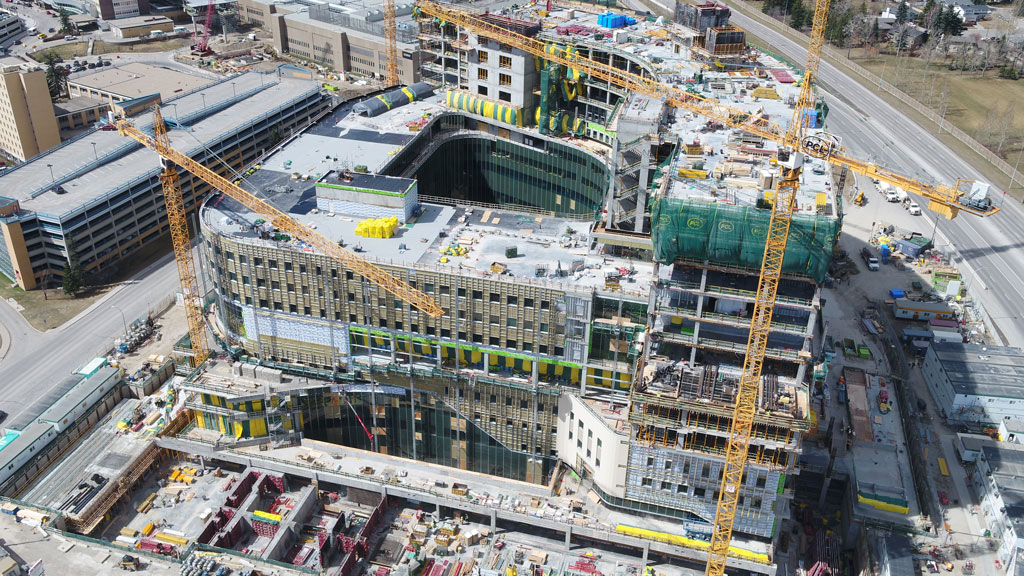 Big news coming down today. Cenovus will buy Husky Energy, adding to the number of consolidations occurring throughout the energy industry.
Check it out ⬇️ 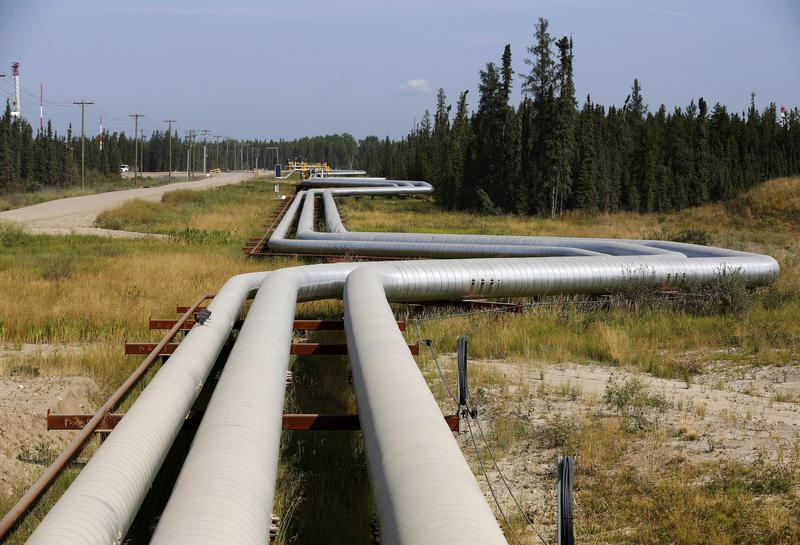 Cenovus Energy Inc has agreed to buy rival Husky Energy Inc in an all-stock deal valued at C$3.8 billion ($2.9 billion) to create Canada's No. 3 oil a...

With the U.S. election fast approaching, @NABTU has endorsed @JoeBiden for President of the United States. Eday is Nov. 3 and like many Canadians, we'll be watching very closely to see what direction our American friends decide to take their country in. 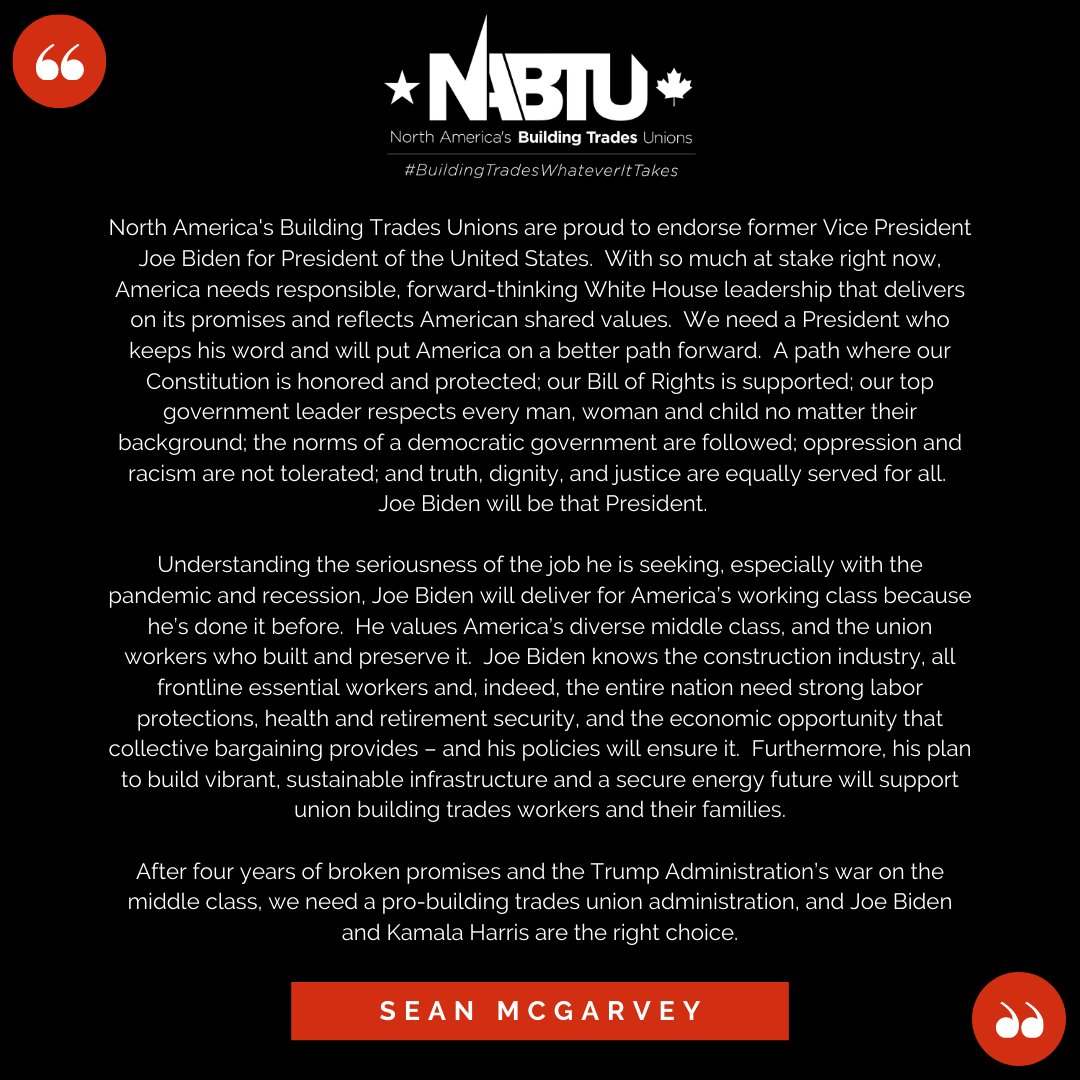 When you're building trades, you're family. BTA supports brother Garcia, an @opcmiaintl 222 Red Seal Concrete Finisher, and his family's plea to become 🇨🇦 Hard workers like Marco and his family deserve to be 🇨🇦 Tell your MP you feel the same https://bit.ly/2FTULRz 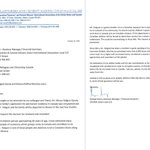 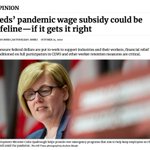 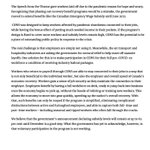 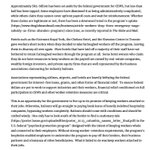 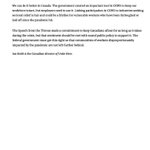 BTA welcomes this much-needed legislation, which will help ensure workers are paid promptly and on time for the good work they do building and maintaining our province. This is something AB has needed for some time #abtrades #ableg #ablabour

Training the Next Generation

4 Steps to Become an Apprentice

Best Training in the Industry

Get to Know the BTA

The Building Trades of Alberta is about PEOPLE, PARTNERSHIPS and COMMUNITY. We coordinate and promote the interests of 18 Alberta local trade unions whose 60,000 members work in the residential, commercial and industrial construction, maintenance and fabrication industries. We meet the challenges of an ever-changing industry in an energy conscious world.

Who are the Building Trades of Alberta members? We are your friends, your neighbours, and the volunteers that make our Alberta communities better places to live.